Do Your Child Need Ear Tubes? 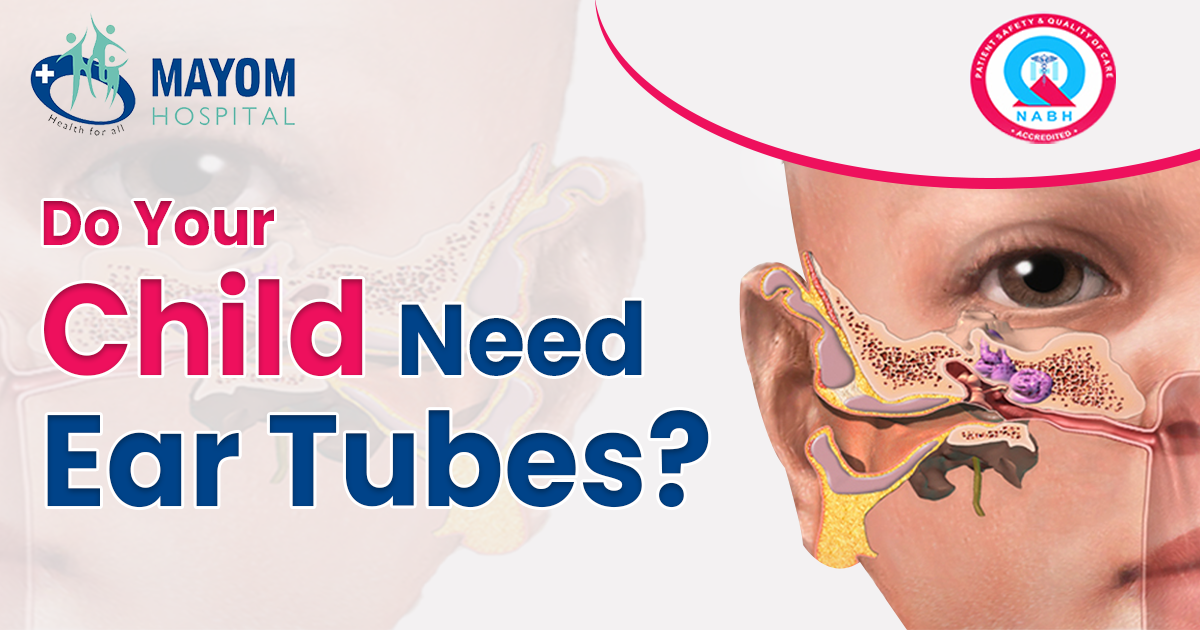 A middle ear infection, or Otitis Media, is one of the most common bacterial infections during childhood, and sometimes a simple surgical procedure, called “ear tubes,” can clear it up.

The middle ear is separated from the outer ear by the ear drum and is connected to the upper throat and the back of the nose via the Eustachian tubes. The Eustachian tubes help equalize the air pressure in the Middle Ear, which can sometimes be lower than the pressure outside the ear. Whenever you pop your ears by yawning or swallowing, the tubes open up to relieve the pressure. In the same way, the Eustachian tubes also help keep fluid from building up behind the ear drum. But if your child gets an upper respiratory illness, such as a cold or sinus infection, the Eustachian tubes can get swollen and have trouble working. Fluids start to build up and put pressure on the eardrum, causing pain, or even a decrease in hearing. This fluid can be infected by bacteria living in nasal drainage. This is called an ear infection.

Why do ear tubes use?

An ear infection can lead to a fever, decreased appetite, pain, or irritability. Your child’s ear may clear up on its own or could clear up with the help of antibiotics. But if the infection doesn’t respond to antibiotics, or if your child has repeated infections, we offer a simple procedure called “ear Tubes” at Best ENT Hospital in Gurgaon Haryana.

Ear tubes are tiny tubes that are put in the eardrum, which allow air pressure to equalize. They are also known as tympanostomy tubes, ear-ventilating tubes, or pressure-equalizing tubes.

How does surgery perform?

The surgery happens in an operating room. First, your child will be given “general anesthesia,” a medication that makes your child sleep, keeping them from remembering or feeling any pain during the operation. After your child has fallen asleep, the surgery begins, and the surgeon looks into your child’s ear using a microscope.

Next, a tiny cut is made in the eardrum, allowing it to drain, and the extra fluid is cleaned up. Then, an ear tube is placed in the opening.  The whole procedure usually takes less than 10 min. the ear tubes will stay in your child’s ear for 6-12 months, decreasing pain, and pressure and improving hearing. Eventually, the tubes get pushed out. They may be covered in ear wax, so you may not even notice them.

Most children are back to normal a few hours after surgery, and may not experience much pain. They may complain:

These are quite normal. You may also notice some ear drainage, which can happen for 2-3 days after surgery. A surgeon may give you antibiotic ear drops until the drainage stops.

At Mayom Hospital, Gurgaon, the Best ENT Doctor in Gurgaon will see your child for a follow-up visit 2-4 weeks after surgery and will continue to monitor your child’s progress over several visits, which may include a hearing test.